Coming out as A Feminist

Proposed legal changes to the Gender Reform Act in the UK prompted me to consider women’s rights, and to discover I am less happy with our position than I thought I was. I began to read new things, and learn new concepts. I tweeted different things on twitter, and had different and new and exciting conversations with a new crowd of women. But most interesting of all: the “journey” has been as educative as anything I have read.

As I began retweeting conversations relating to women’s rights and the proposed changes, I quickly received a vicious backlash. Exclusively from men (with one potential exception). People I had been following for ages, had interesting conversations with, self stated “comrades”; one by one all turned on me. They called me names, then blocked me before I could reply. It wasn’t enough for them, simply to unfollow me. They had to contact me, and tell me in the most offensive language how I had disappointed them.

I post one such interchange here. I haven’t hidden his name because why the hell should I?

At that point, I blocked him. He was not alone 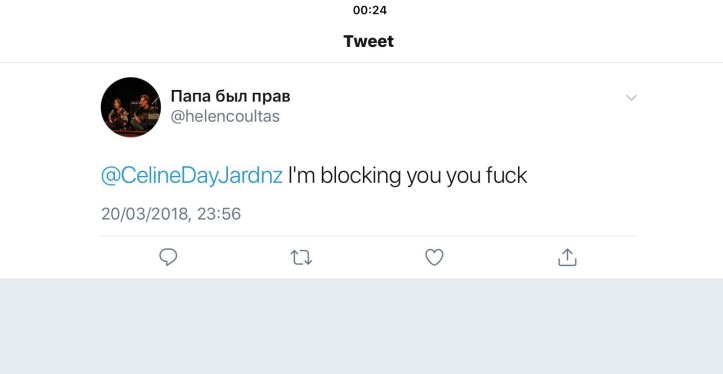 I was threatened with legal action, by a big brother winner with a verified account and a lot more money than me

I began to dread notifications. I used to have a link to my blog, on my twitter page. A man stalked me here to my blog, called me a transphobic bitch, and told me he had had me reported on twitter and he would make sure my account got closed down (this did not happen, but it has happened to many other women).

Even my ex husband had a few things to say about it. He isn’t in the #transcult, so he didn’t see me as transphobic. But he said my tweets had been “very angry” recently and I had been “a bit man hatey”. We are friends but it lead to a bit of bad feeling between us.

As time went on, only two male contacts were still in touch. We had discussed the proposed legal changes privately in DM, and it was clear we agreed, and they understood the threat to free speech and also to women. They were also “gender critical” and perfectly aware of how women were being silenced in this debate. But although we agreed privately, I noticed they never liked or retweeted anything I posted ever again, and we never spoke again.

It became impossible to deny I was being silenced, and that it was systematic; and I was hearing the same story, from many women. This intensified when Jeremy Corbyn announced the labour party’s backing for the proposals. Just as brexit seemed to release the inner racist of the average Brit, so this issue released the inner misogynists. Women like me who had grown up being told we didn’t need feminism any more because we have equal rights now, suddenly realised we had been lied to. The vicious abuse from the men we had previously believed to be allies hit us hard.

I began to crave a space without men. I was aware of never feeling free to speak without fear of attack. And I was frustrated that our efforts to protect women were constantly being derailed and the conversation taken off in other directions by men. I thought about other countries I had been in, and how free women are there. I began to see that just as capitalism is a war on the poor, so the patriarchy is a literal war on women. And that the numbers of my sisters dying was never being collated. The toll is not counted. Young women are being kept unaware of our position. And any attempts to discuss male violence in the public sphere will be violently closed down. And our politicians will not save us. In fact, they are acting against us.

I began to think of my history, again. I revisited female role models and read their works again. I encountered new female speakers and activists. I started re-evaluating events from my own past, and finding that my experiences were not exclusively bad luck or bad choices, as I believed, but in fact are happening to many women. And that they form part of our systematic oppression, and that this is carried out by the men around us, in our daily lives. One example here 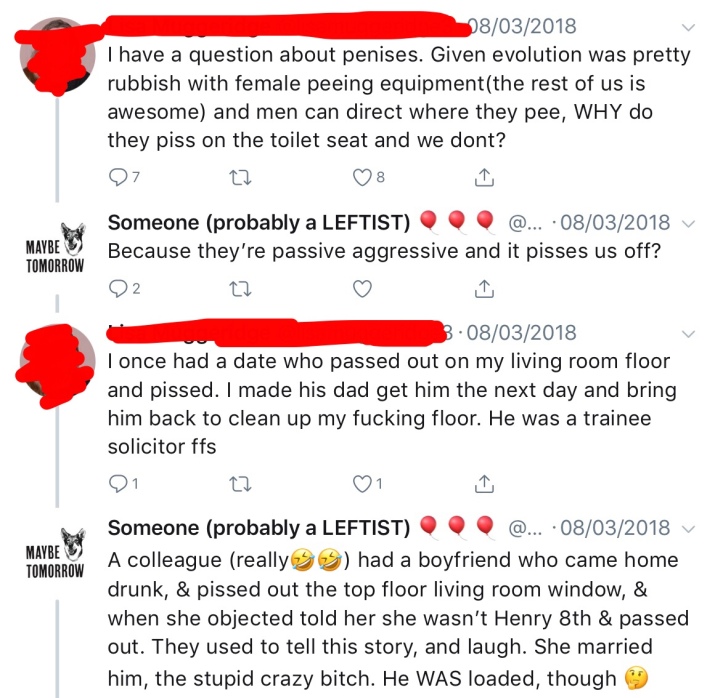 I’m not sure, how to conclude this post. What have I learned? That, as Germaine Greer wrote, “Women have very little idea of how much men hate them”. I learned that in all the protest marches I had been on, I was nothing but picket line candy. The moment I tried to speak up for women, I was no longer acceptable. I resolved only to work with women in future. My male comrades accused me of being a splitter. I told them I ain’t splitting nothing and they can come join us on our march any time they want to. But from now on, I wont do one more free hours labour for a man, I don’t care what his “politics” are. I resolved to own our own movement.